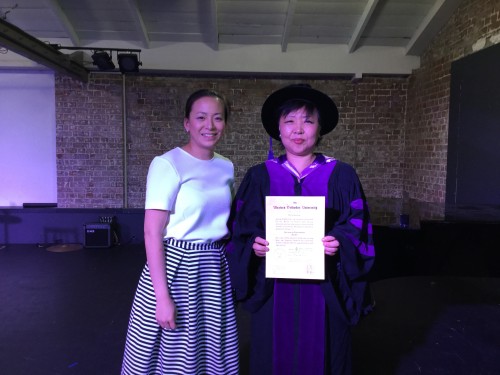 On 4 December, a ceremony of presentation was held at the Australian Performing Arts Grammar School in Sydney, Australia. Professor Kyunghee Lee received the degree of Doctor of Philosophy of the University from Dr William Clark, who was representing the Chancellor.

Dr Lee, who is originally from Korea, has given twenty five years service to Music Education at studio, Secondary and Tertiary levels. Having earned a first class Honours degree in Creative Arts at the University of Wollongong she pursued postgraduate studies leading to a Master of Music degree from Australian Catholic University, Melbourne, as well as at the American Conservatorium, USA. She has performed internationally as a concert pianist and often served on juries of international piano competitions and given masterclasses. She was President of the Australian International Conservatorium of Music before moving to her current position of President of the Australian Performing Arts Grammar School. She is also President of the Liszt Society of Australasia.